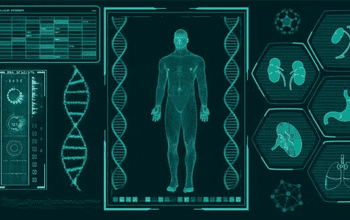 This course is designed to give the reader an understanding of the concept of interoception and how it can be leveraged to improve performance in esports. 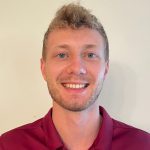 Brett Becker MS, OTR/L, ACE-CPT is an Occupatioal Therapist and an American Council on Exercise (ACE) personal trainer where he has history woirking with traditional athletes. His traditional sports experience includes football, baseball, basketball, tennis, golf, disc golf, volleyball, and wrestling. His undergraduate degree comes from the University of Northern Iowa in Psychology with a strong interest in sports psychology. Following undergrad he went on to earn his Masters in Occupational Therapy at Allen College where he now resides in Minneapolis, MN working as an Occupational/Hand therapist. He has been involved with multiple esports performance initiatives and education programs.

What Will You Learn?

Throughout our lives we each experience a whole host of different feelings and sensations. We all learned about the five basic senses: sight, hearing, touch, taste, and smell. They’re not our only senses, though. Proprioception, or your body’s awareness of where it is in space, and vestibular, which contributes to your sense of balance, are slightly less commonly known. But there are plenty of senses beyond that, including interoception.

Interoception is defined as “the sensing of internal physiological states of the body (e.g., hunger, micturition, thirst, temperature), which serves as a means of regulating and maintaining homeostatic conditions” (Craig, 2009; Sterling, 2011). Interoception is different from our other, more well-known senses: our exteroceptive senses. Interoception, on the other hand, is an internal sense. 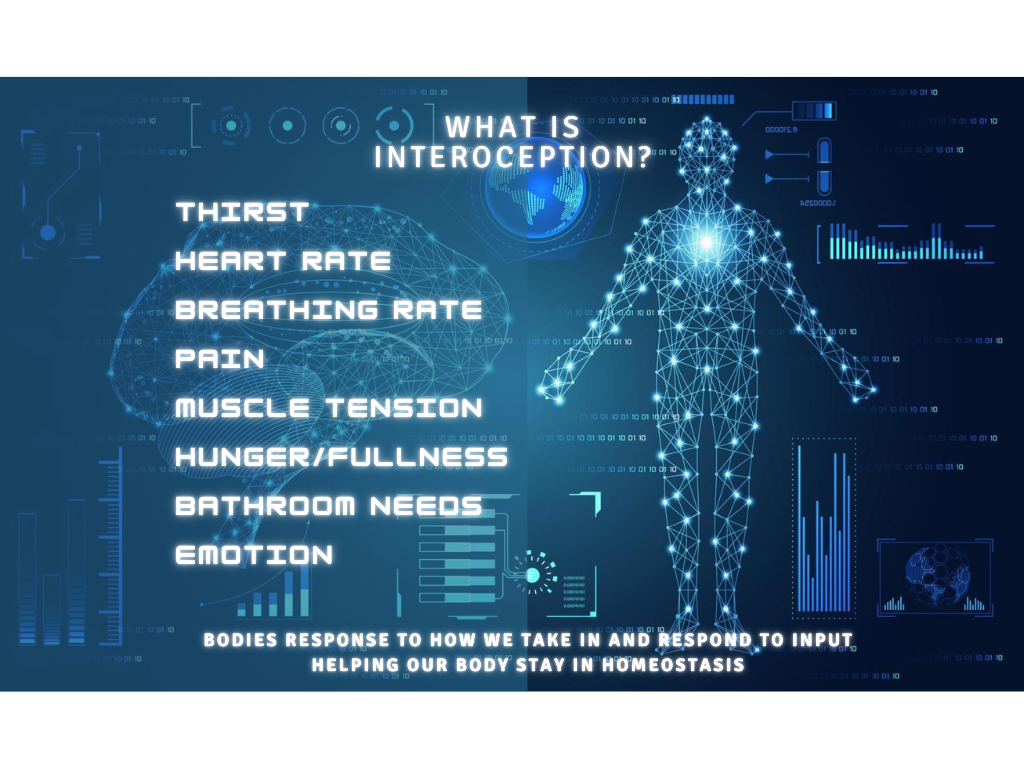 In a recent study by Tanaka and colleagues, researchers sought to investigate the association between work performance and “body trusting”, which is a dimension of interoceptive awareness representing mind–body interactions. They looked at 349 workers who were given self-report questionnaires including evaluations of work performance, body trusting, psychological distress, pain persistence, workplace and home stressors, and workaholism. To measure body trusting the Multidimensional Assessment of Interoceptive Awareness (MAIA), was used which assesses interoceptive perception. The MAIA consists of eight dimensions: noticing, not ignoring, not worrying, attention regulation, emotional awareness, self-regulation, listening, and trusting. This assessment has been shown to be reliable and valid, and higher scores indicate greater confidence and reliability in one’s body experience.

People with pain also demonstrated less body trusting, and it’s no surprise that someone who is in pain will perform worse than someone without pain. This can also be something that gets overshadowed in the gaming community as there is still a lot of stigma on injuries/pain in gaming. Players are reluctant to tell teammates or coaches that they’re dealing with pain or injury, as they fear it can threaten their role on the team or their career longevity. Teams/organizations and coaches need to establish a policy one of open communication and trust. This encourages players to express their needs and concerns, and results in those needs and concerns actually being addressed across a variety of areas, from performance to pain to mental health. Currently, robust support structures are limited to top players and teams, but to advance esports as a competitive industry, coaches and support staff must be trained to promote increased communication, without a player fearing retribution for their openness.

In addition, as we recognize that performance is improved while no pain is present, preventative strategies to decrease pain and injury risk are critical. It is always easier to prevent injury than it is to react and treat an injury after it occurs. These may include establishing better sleeping habits, focusing more on a healthy diet/nutrition, increasing activity levels generally, performing specific preventive exercises, addressing ergonomics/posture, establishing routines, and incorporating support for mental health.

This article also shows the importance of working on preventive strategies because of the tight connection between our physical and mental health. Cognitive performance is a significant component of successful competitive gaming. This study demonstrates how a high level of interoceptive awareness allows us to overcome adversity, manage negative emotions better, make us more resilient, increase friendly behavior, improve communication, and cope with stress–all of which help substantially within competition.

Social connection has evolved significantly over the last few decades with how individuals interact and form relationships. Today, more than ever connections are being formed online through social media, apps, and gaming. Though these connections are different, it does not minimize the importance that this feeling of connection and belonging brings to individuals. According to Maslow’s hierarchy of needs, love and belonging fall right in the middle forming the first of the psychological needs. In order to reach self-actualization, all of our other needs must first be met. For esports gamers this means that love and belonging plays an important role as to how they perceive themselves (self esteem) and how motivated they are to be the best at their craft (self-actualization). Forming these connections and relationships can be a complex thing at times as there are many dynamics, social cues, and variables that are taken into account. One of these areas that may demonstrate significance is that of a heightened sense of interoception within ourselves. As we become more in tune with ourselves, it is easier for us to experience stronger emotions, be more self reflective, and engaged with others with less anxiety which ultimately makes us more likely to experience positive relationships. These positive relationships allow individuals to meet the need of love and belonging and allow them to focus more on self-actualization. 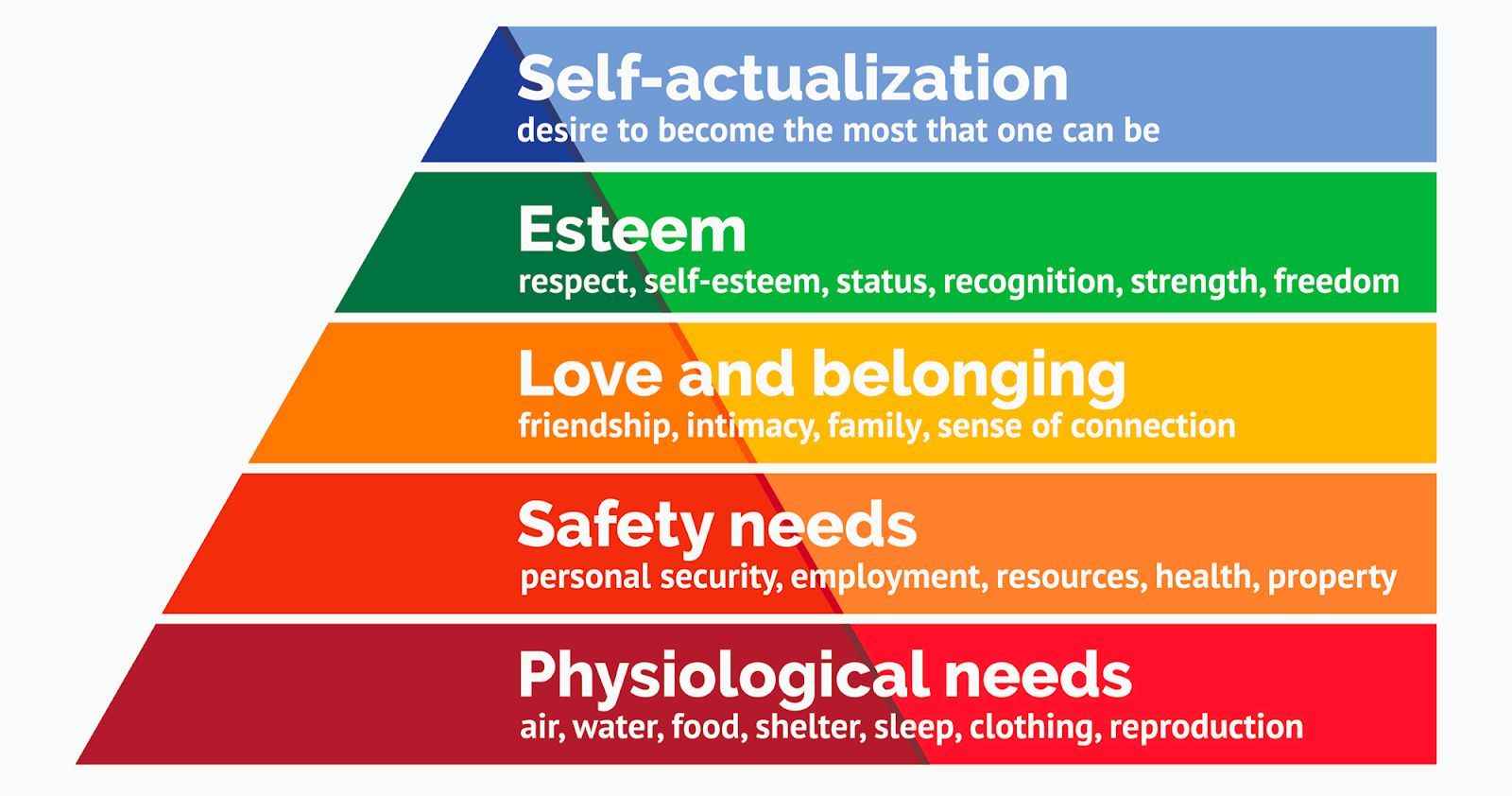 In a study by Arnold and colleagues, researchers completed a review looking at what factor interoception plays in loneliness and social connection. They identified three key dimensions surrounding interoception:

One study the researchers identified discussed how social exclusion through playing Cyberball, a virtual ball toss game, caused an acute decrease in interoceptive accuracy. The researchers hypothesize that when it comes to interoception and social processing, an individual’s ability to feel bodily reactions translates to having a richer emotional experience. This hypothesis is based on previous research which indicated that increased interoception accuracy is associated with stronger emotional experiences, which can in turn create a positive feedback loop leading to an improved self-image and confidence giving a performance boost in all areas of life. The inverse of this was discussed from a study by Grynberg and colleagues, who found that interoceptive dysregulation results in difficulty identifying one’s own emotions and sensations as well as the emotions of others. This can have a negative impact towards team dynamics and relationships and be extremely costly in overall performance if this is a lacking area.

Humans are inherently social creatures and require a certain level of social connectedness to prevent social isolation. Loneliness is a perceived sense of social isolation and is a strong predictor of depression. A heightened sense of interoception facilitates social connection by understating social/emotional signals and allows us to accurately tune in to properly react and respond in social settings, which improves our connections and decreases perceived loneliness. 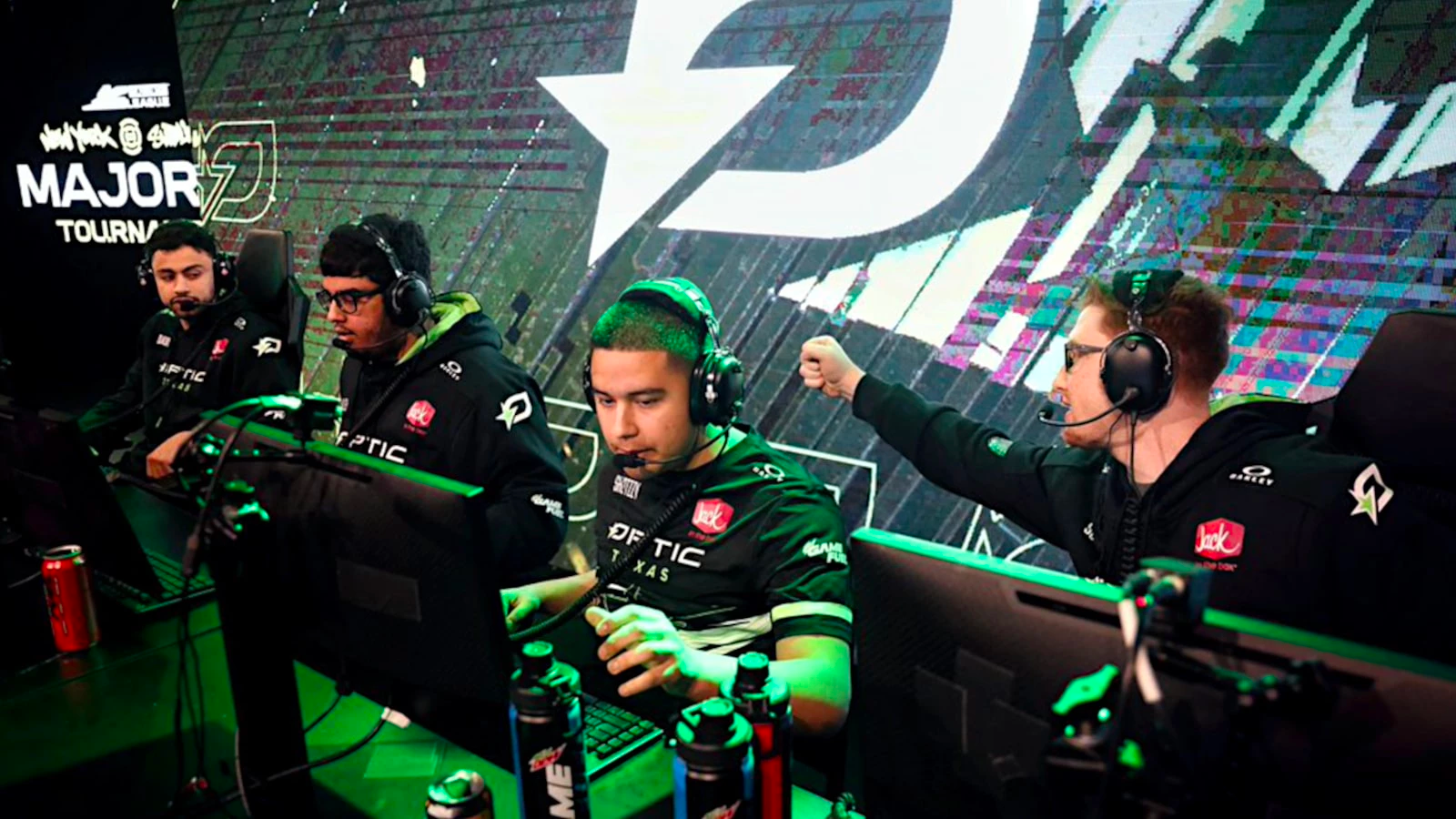 Gamers require a strong understanding of communication both in- and out of game. Effective communication is a hallmark of in-game success, but also both reflects and influences team cohesion. Along with communication, gamers need to be resilient when it comes to competition. Players must be able to rebound from losses, maintain focus in loud and distracting environments, and maintain focus in high-pressure situations. All of these abilities benefit from a strong sense of interoception.

McMorris (2012) sought to identify what role interoceptive mechanisms play on both cognitive and physical fatigue. In his opinion piece, he looks at a number of studies addressing the role that cognitive fatigue plays on physical performance and relates it back to the importance that interoception plays on cognitive and physical fatigue. Throughout the article he breaks down many of the ways the body responds to new information and processes it and how a stronger sense of interoception may play a role in performance for both cognitively and physically demanding tasks within competition. The full text of this article can be found and read here, and is recommended reading for this course.

Prior to activity, the body starts to prepare for what is ahead. The nervous system takes in as much information as possible, and based on the available data including previous relevant experiences, the brain makes decisions (some conscious, some subconscious) on which actions to take. Two of our cranial nerves that contribute to this process involve aspects of interoception are the vagus and glossopharyngeal nerves. The vagus nerve helps regulate and monitor breathing, digestion, heart rate, and reflex actions such as coughing, sneezing, and swallowing. The glossopharyngeal nerve functions to regulate blood pressure, saliva production, and other physiological conditions.

When the body receives information from a stressful event, encounter, experience, etc, noradrenaline (norepinephrine) is released in the body. This neurotransmitter plays a role in telling our body to become more alert and attentive, or stimulating our “fight or flight” response. The previously mentioned cranial nerves will respond to the messages from neurotransmitters, and the overall sensation is ultimately monitored through our sense of interoception. The release of norepinephrine also stimulates the release or withholding of dopamine. Dopamine is a neurotransmitter in the brain which plays a role in motivation, cognition, memory, mood, and attention.

When an activity is perceived as being too challenging or not challenging enough, the brain does not increase its arousal as optimally because it has already made a predetermination on the outcome. This moderately challenging activity is important for a lot of reasons as it is easier for the body to produce maximal effort on tasks. Whereas an unmatched challenge (too much or too little) will be perceived differently, triggering a different response ultimately leading to producing submaximal effort. Author Terry McMorris states “the reproduction of submaximal effort, or pacing, is not only demanding physically but also perceptually, as it involves a judgment regarding the pacing.”

In preparation for activity, your brain also analyzes the expected reward and anticipates the effort cost (perception of effort), allowing you to consciously or subconsciously make  judgments as to whether the reward is equal to the effort cost. This also affects the quantity and speed of neurotransmitter release. The brain makes these determinations to preserve energy so that it is not going all out for a small, easy task, and allots an appropriate amount of energy, fuel, and attention accordingly. Noradrenergic neurons are neurons which supply the body with the neurotransmitter norepinephrine (responsible for our fight or flight response). Release of norepinephrine is designed to sustain the body with energy to complete a particular activity with the available resources available in the body. Improved interoception allows for more accurate assessments of effort vs. reward, and as a result reduces cognitive fatigue. This in turn allows for a more consistent level of play.

Evidence shows that there are a few interventions which can be done to increase one’s interoception. These interventions consist of mindfulness-based stress reduction (MBSR) techniques as well as meditation which has been shown to increase interoceptive sensibility and interoceptive accuracy. By focusing on these strategies of breathing, meditation, journaling, yoga, and mindfulness strategies we may be able to increase our sense of self from within therefore reducing stress, anxiety, while increasing performance, confidence, coping skills, and emotional regulation. A future course offering in this program will include a comprehensive breakdown of how to improve interoception for gamers. 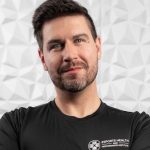 The largest collection of gaming-specific health, fitness, and performance information on the internet, brought to you by the experts currently working in the industry with top-tier esport organizations.

Organizations that have benefited from the expertise of our authors include Cloud 9, Team Liquid, 100 Thieves, FNATIC, G2, TSM, and more.